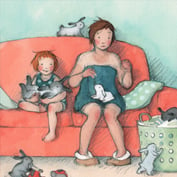 I was initially reluctant to pay for a full year of Phil, but soon learnt he, and Grandma’s Jars, were absolutely worth it!

I work as a children’s book illustrator, which sounds very exciting, but the money side of things can be pitiful at times and very irregular. Royalties arrive every 6 months and you can never be sure what the figure will be. In addition to that, I have always been quite impulsive – I take opportunities when they arise and in the past when money was bountiful I saw it as an opportunity not to be missed! I’m also a single parent and at the age of 40 I realised I wasn’t doing a great job of sensibly providing for us.

I really felt that Phil had met his match; that my situation was impossible to level out. However, a year on, Phil and Grandma’s Jars have completely removed the haphazard nature of my finances.

There have been very few moments along the way where I’ve felt as though I’ve missed out on things. I was worried I’d have to be extremely frugal, but that hasn’t been the case at all. I’ve only ever had to be sensible (and be accountable to Phil!). I’ve even found great relish in the unexpected expenses, the new car tyres, the odd vet visit, when instead of feeling great remorse at having to spend money on something I wasn’t expecting, I now feel quite jubilant that I actually have the money there, set aside specifically for that very reason.

Due to the inconsistent nature of my income and the fact that I basically lived from one royalty cheque to the next, it was a slow start for me. And it really did take a full year to see an improvement. I was initially reluctant to pay for a full year of Phil, but soon learnt he, and Grandma’s Jars, were absolutely worth it!

What I’ve learnt this past year, and the minimal structure that has become part of my daily life, will serve me for the rest of my life. I will be forever grateful to Phil and Grandma’s Jars, for the patience, wisdom and personal guidance he has provided. He’s an absolute gem and a genius.