Budgeting creates results in only 1 month 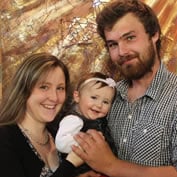 We started the Grandmas Jars program in August and the first thing we noticed was how much money we wasted by not paying attention.

We were first introduced to Phil in July 2013. As newly weds we had set up a budget and thought we were doing okay managing it, but we never had anyway of checking that we were actually sticking to it. We never realized we were living week to week until Lisa fell pregnant.

Phil’s timing could not have been better. When we heard him speak about the debt spiral we realized that our assets and the way we were living were taking us further and further behind and we needed to do something about it. We started the Grandmas Jars program in August and the first thing we noticed was how much money we wasted by not paying attention. Our phone bills were unnecessarily high and we were spending a lot of money on takeaway lunches instead of planning our meals for the week. So we sat down with Phil and re-evaluated what was truly important and how much money we should be spending. By September, only 1 month into the program, we noticed that we were no longer shuffling money around to meet our weekly commitments but that the money was in the account ready and waiting.

When Elizabeth was born in December, Murray was able to take 5 weeks off work to spend with the family. This was something that we thought was never going to be possible only 5 months before! With the continual changes in a new family we have been able to adjust our budget according to our income and we can honestly say we have never been without the things we need, even when everything was really tight. Phil has been a massive encouragement through the difficult decisions and an honest voice of reason when we have been unsure. We have so appreciated his advice and guidance over the last year and know we are on our way to being debt free and available to the calling of God.

We could never thank Phil and his family enough!